A Beautiful Day in the Neighborhood

This blog post about Fred Rogers (a.k.a. Mr. Rogers) is going to have you on the edge of your seat! (insert a few eye rolls)

I know exactly what you’re thinking because I had the same thoughts while I was standing in line with my wife to see the movie. But I sucked it up because I remembered that about 30 years ago I took her to see Die Hard 2 (a great Christmas movie in its own right), so I knew I had this coming.

The movie is based on the Special Hero Issue of Esquire Magazine from 1998. The heroes in this issue ranged from iconic sport stars to congressmen and war heroes. Each of them had a huge impact on America, and I think they were all more popular and “cooler” than Mr. Rogers. But he was on the cover. Why? It was the connection that Mr. Rogers had with Tom Junod. Tom, a hard-hitting investigative journalist, received an assignment to write a 400 word “puff piece” about why Mr. Rogers is a hero. The reason he received this assignment was that no other subject wanted to be interviewed by him. At the end of the day, Tom turned a 400 word “puff piece” into an 8,000 word essay and it became the cover of the special issue and the feature article. It wasn’t planned that way, but it happened because Mr. Rogers influenced and changed Tom’s life. How did he do that?

The answer is actually quite simple. Fred Rogers:

Knew his purpose: He wanted to have a positive influence on the world.

Was authentic: Fred Rogers was Mr. Rogers (he didn’t have to get into character – he was himself all the time).

Invested in people: He listened to children and adults because he genuinely cared about them.

Was thankful for the people around him

Just imagine what the world would look like if we followed Mr. Rogers’ example — know your why, be yourself, listen to others, encourage people and be thankful. It would be a beautiful day in the neighborhood! Sorry, I couldn’t help myself (replace eye rolls with smiley faces). It’s a new year, and a great time to try! It would also be a great example of leading the Interstates Way! 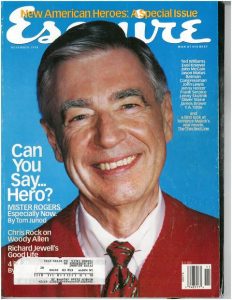 “Leadership is an action, not a position.” I recently came across this quote by Donald McGannon. It got me thinking about how being a leader isn’t about the number of…

From a Child’s Eyes

I gazed into her beautiful brown eyes, struck again not only by that charming combination of dark brown eyes and strawberry-blonde hair but by the lessons reflected there. They were…

The last 18 months have been anything but ordinary. Now, as the economy begins to improve, our schedules are naturally getting busier. It can be hard to decide where to…